SMALL and medium-sized rubber product companies are bracing for the impact from the buoyant prices in their raw materials, namely the SMR 20 and Latex in Bulk, as global demand is expected to outpace supply this year.

Industry players concur that it is inevitable that prices of rubber products would rise further to reflect escalating costs, which have gone up by over 60% so far this year.
They said the long-term effects of high natural rubber (NR) prices would take a toll on downstream users and manufacturers would need time to adjust to such rapid increase in prices, with the cost transferred to the consumers.

Malaysian Rubber Products Manufacturers’ Association vice-presidentLim Sum Teck told StarBiz that it was an uphill battle for small-time players to stay in business given the high costs of raw materials that led to higher operational costs.

“Big players normally secure long-term contracts for their raw materials, locking at reasonable prices, but smaller companies cannot afford to do so given their insufficient working capitals.
“I will not be surprised if there is a consolidation within the industry, particularly those severely affected like certain compound and industrial rubber goods makers, if the raw material prices stay volatile for the rest of this year,” he added. 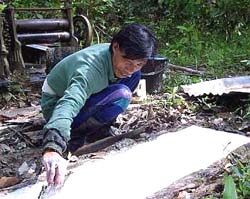 Rubber tapper Jantrin Sanggap, 44, putting the rubber latex into the mould at a plantation in Kampung Tuhu, Beaufort in Sabah – Filepic

One industry player said: “The name of the game is volume. Big and more efficient players will remain while those smaller ones will either be acquired or forced out of business.”

Commodity analysts believe that the average price of NR, which is trading at a 20-year high, is expected to remain high at least over the next two years. Some even forecast that the SMR 20 price to hit RM9 per kg “anytime soon” and reach RM10 per kg next year. The price increases were mainly driven by strong demand from newly emerging economies like China and India as well as potential shortage in global production. Last year China consumed about 21% of the total NR world output.

He said local rubber glove players had no choice but to increase their product prices given such high prices for Latex in Bulk their main raw material.

“As rubber gloves increasingly become a commodity, size does matter. Economies of scale is instrumental in ensuring competitiveness,” he explained.

Top Glove Corp Bhd, the world’s largest rubber glove maker, has raised its selling price by up to 15% so far this year, in three stages.

Analysts said the group would likely mark up its price “at least four times” this year. This would include the three price hikes that were already carried out from January to April this year.

Malaysia commands about 60% of the global rubber glove market and is currently the largest rubber glove exporter, followed by Thailand and Indonesia.

Price increases for rubber gloves will depend on the manufacturers

Tyre Retreading Manufacturers’ Association of Malaysia has also increased the prices for tyre retreading services by 10% to 15% this year. The association spokesperson said: “Retreaders are compelled to take this decision in view of the surge in prices of raw materials, especially natural rubber, synthetic rubber and carbon black, which are the main ingredients for retreading.

“Last year, the price for tyre retreading increased by 3% and this year’s quantum of increase is one of the highest thus far.”

The Tri-partite Rubber Council created in 2002 by the three major rubber producing countries is currently implementing supply management measures that would help keep NR prices stable, which will benefit both manufactures and producers.

“We would like to see prices kept stable between RM5 and RM6 per kg so manufacturers’ planning and costing can be more predictable,” said an analyst with a local bank-backed brokerage. 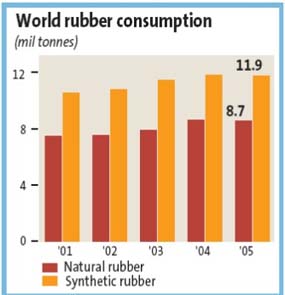